According to the electrical panel of the house, the previous owners had all kinds of stuff going on in the basement. From what we could discern, it was the basement, laundry room, furnace room, game room (dart board on the wall, a left-behind foosball table) and a photography darkroom.

They also had this crazy under-stair storage area going on. It was ugly and felt like it took up a lot of space even though it was only enclosing the under-stair area. Even if we decide to rebuild some kind of storage there again, hopefully we can make it a little more attractive.

Emily ripped the paneling and doors off, and then said something along the lines of “It looks like a lot of the beams holding the stairs up have been cut off”. These previous owners obviously did some questionable things in the house, and this is one of them (she’ll post about other weird things sometime soon – nothing too worrisome, just probably not encouraged by Scott McGillivray or Mike Holmes).

In the photos below, fig. a and fig. b show where the main supports were sawed off. Fig. c shows where they added a post that didn’t seem to do much, mainly because the post wasn’t really touching the beam to add any structure.

So I removed them all once I figured out a way to rebuild a necessary (and stronger) support structure. The photo below is the space beneath the stairs with all old beams removed.

And in the next photo, I’m installing a king stud/jack stud combo on the least-supported corner beneath the stairs. This is actually the same stud you see in the above fig. c, but it’s attached in a different way which makes it immeasurably better (because we don’t know how to measure that metric).

For the other 2 areas that needed beams I just doubled up on 2x4s and wedged them in. I sat them on a slice of 2×4 rather than on the cement floor so if it rotted only the little 2×4 base would need to be replaced.

Now that there’s structure under the stairs, I’m entertaining the idea of making a little clubhouse for Cody to chill in when he wants to hang in the basement for some dude time. Maybe I’ll enclose the part right under the lowest steps and make a door, a platform to raise his area off the cold cement floor and throw some towels in there for comfort. Hmmmm.

Hi y’all. It’s Emily inserting herself into Pete’s post. Codeman really digs the cool basement all summer (sure beats napping on hardwoods in 90+ degree weather). So, like Pete said, it really is his “dude space” for half of the year, and we may as well make it comfy.

Side note: Am I seeing a water-damaged wall or is that just a little mildewy from being blocked off from air circulation for a decade? Hmm… stay tuned for further investigation. 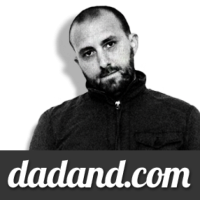 Pete
Pete is the creator of dadand.com. Dadand is a mashup of all things dad-, and dude-related. DIY, repairs, cars, gadgets, whatever. Plus we're chasing around kids and fixing toys.

Wow, you guys should start your own show on HGTV!

It may still be too early for that, but why not head over to apartment therapy and nominate merrypad.com for The Homies 2011, Homie? (Nothing like a little shameless self-promotion.) Thanks Sharon! http://www.apartmenttherapy.com/ny/the-homies-best-home-design-blog-of-2011-submit-your-nominations-137078

Hi, thank you for the post and the photos. I love this. Looking forward to see next posts.