Back up 24 months (almost to the day), and realize that I had to do some repairs to the home before I actually moved in to qualify for my FHA loan. I had a great realtor who brought over her own power tools (still didn’t have any to speak of, oh how I’ve grown). She helped me build a basement stairwell railing, repaint a chipping overhang, and hire a crew to build some outdoor stairs to the sunroom door (they’ve since come down with the rebuild of the whole deck, the little ones were for show and temporary use only but still cost me $150, greedy contractors). Although, once I moved in, I removed the stairwell railings so that I could paint beneath them… and I never reinstalled. I liked the bare, clean walled look. Sue me (no, really, don’t). 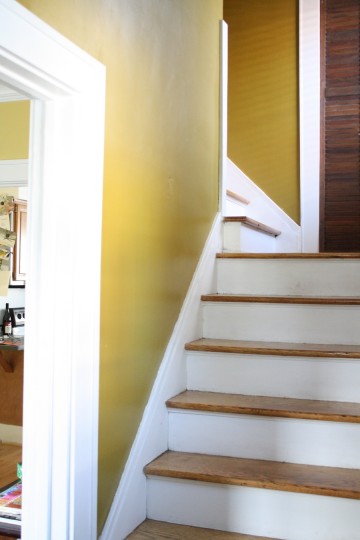 I don’t have much of a problem going up and down the stairs, but it’s been obvious that it’s harder for grandma/grandpa/children to get up and down easily without the added stability a railing offers. Even I admit to holding the wall for balance, especially at night or in thick socks (those steps are slick poly’ed hardwood, yo). Knowing that eventually I’d have to put the railing back up anyways before I even think about selling someday (any FHA’er would need them, and anyone concerned with safety would expect them), I caved and put one of them (the longer and more important of the two) back up.

Cody wasn’t really interested in helping because he was tired post-dog-play date. 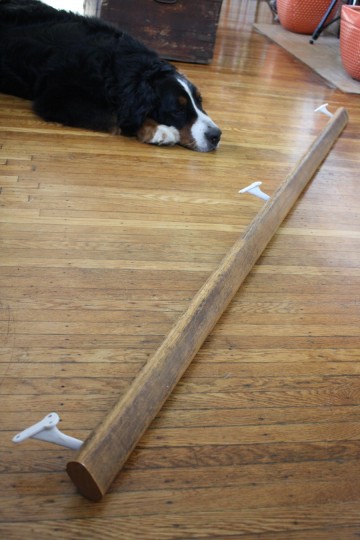 Figuring that it would be as easy as it was when I took it down, I started by re-attaching the center screws first, since the height was accurate, and I could reuse the same plastic anchors that were (so carefully) preserved. They were painted over to “blend” but really were driving me crazy. 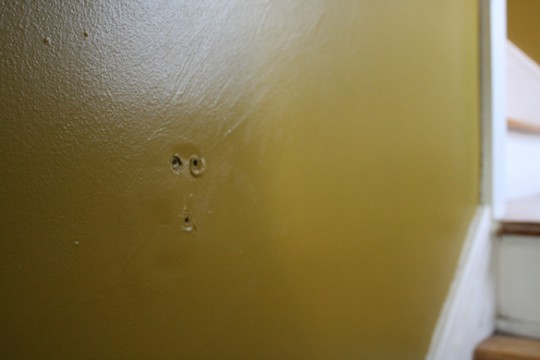 I bought some new heavy-duty wall anchors to fill in a few other spaces and strengthen the attachment of the railing to the wall (my railing could probably support 400+ pounds if I calculated correctly). Some of the screws went straight into studs, which was great, meaning I have leftover anchors for other projects (squeal!).

Where this reasonably simple install went wrong is that I failed to re-measure the rise of the railing at the top of the stairs and bottom of the stairs to be consistent. Whoops, I was rushing because the Sabres game was about to start. When all was said and done, the railing was as low as my butt at the bottom, and up to my armpit at the top. Not good.

Out came the tape measure, and out came the screws attaching the top and the bottom to the wall. The railing fortunately is designed to pivot on the brackets a little bit, so we tweaked the angle to match the angle of the stairs (providing a rise that was at my hip both at the top and bottom) and re-screwed the railing in place.

Of course, then I was left with some holes from the first install, so I patched… 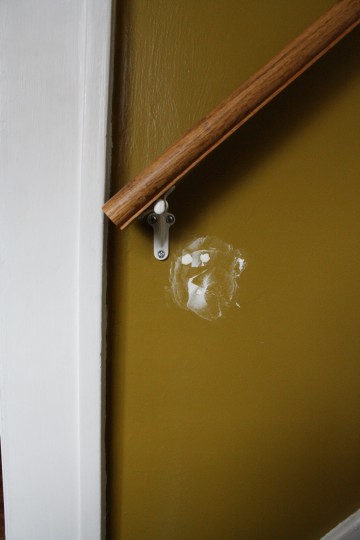 … and sanded, and repainted those spots (lucky to save the last little bit of the original paint can). Looking much better now. Well, as good as it can look with an unsightly (my opinion) railing in the space. Safety over design.

Although I am looking for ways people have updated/painted/customized basic railings to make them less… expected. Send ideas my way if you have any!

I wonder if there is a way to make a bannister that looks more like chair rail, maybe something sort of similar to the white trim at the bottom of the wall? Not that your bannister looks bad, just as you said “expected”. I’ll be sure to pass along ideas for bannisters if come across any!

I’m considering painting it. If I was more capable of detailing something ornate, I’d probably give it a try and just sand/paint over it if it didn’t work out…

Have you considered instaling some wainscotting or board and batten in the stairway? That would make add architectural interest AND allow you to incorporate an attractive look for the banister.

You’ve got me thinking. I wonder how board and batten on the entire wall would look (not just as a chair rail height)?

I think that’s the most I’ve ever heard of a Realtor actually working for a client before. I think of Realtors as 2/3 advertising, 1/6 relationship, and 1/6 actual work. I’m glad you found someone who makes the ratio a good bit better! There are a few out there who are really good, but they are few and far between.

Rare, yes. And the group she’s with gives out a free turkey every thanksgiving too, so they’re good about the keeping-in-contact bit as well (of course that’s the advertising quota). I think she was most helpful because she and I could relate quite a bit, making a connection I know I never would have had if I had opted for one of the old man geysers that’s more publicized.