I finished up a short list of small projects this month – ones that wouldn’t actually prompt an independent post, but definitely make me want to pat myself on the back. After all, when you’re doing projects to write about those projects, some of these other home maintenance to-do’s fall by the wayside, like moving the clothes from the washer to the dryer, or remembering to put the milk back in the fridge.

But I’m relieved to have crossed these few basic things off the list.

1.) A lighting project doomed from Day 1.

Sound the fog horn. It didn’t work out. Too matchy, too stand-outtie. I removed the light again, spraypainted it white, and reinstalled. Much better. Very subtle.

And then I noticed that since the light had previously been at an angle, the previous homeowners had painted right around it. Not so subtle. I actually can’t believe I hadn’t noticed that before (shows you how often I’m focused on that flush light). So I touched up the ceiling paint to disguise those visibly un-painted areas and called it a day. The ridges from the old paint wouldn’t sand off easily. I tried. Probably need to engage a power tool next. 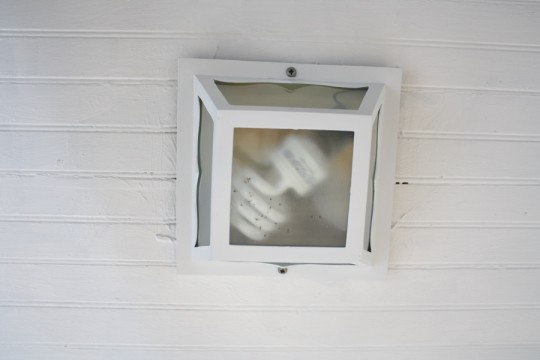 With the new IKEA pendant that I hung in the sunroom, I had originally installed a 100-watt bulb. And, quite honestly, even at 10PM at night, it felt like noon under that bright light. I felt like I was illuminating the whole street. It took 2 minutes to walk to the basement, find a simple 25 watt bulb, return to the sunroom light, and swap it out. Now the room offers just enough light to be cozy in the evenings, without feeling like I need to blast on some SPF.

Pete gets 95% of the credit for this one. It was one of my big to-do’s for October. All I can say is that I was catching up on embarrassing reality TV and editing photos, and Pete vanished for 3 hours. Bad TV can drive a man to clean. That’s the takeaway here.

Tools organized beneath, shelves sorted, everything in its place. Heavenly.

The other 5% of the credit I’ll give to myself because once my shows were over and I saw him being productive, I tackled my paint can avalanche over on the other side of the basement, and stacked them neatly against an unused wall. They were much too heavy for that rickety-found-by-the-side-of-the-road plastic shelving unit anyways. Plus, I was able to separate the previous owner’s old paints from my newer cans and dispose of them properly.

Still, it could be more organized. Like, on wall-mounted shelves. Sigh. I clearly should have bought stock in a paint manufacturer.

Well, aside from me having blogged about it here and here. I did have to buy another gallon of Burnished Bronze paint to recoat the wall that the gallery once lived on; the number of nail holes required quite a bit of patchwork, even though it was already a plaster wall, and to properly and evenly cover it, I repainted the entire wall. Nonetheless, the good news is that it’s a blank slate again, and the paint-guys-slash-paint-mixin’-machine at Home Depot did a stellar job matching this shade exactly to the first can I owned. On the first try. So I didn’t even need to paint exactly up to the trim again. Booyah.

After painting the office radiator (something I showed you here at the same time I showed you how I painted the office cabinetry pink), I moved on to the master bedroom. Silver looks good with dark gray walls, too. No surprise here. I just love the look of the metallic radiator so much more than the dirty off-white that it had been that there’s no desire to go back. (Also, if you want a real tutorial on how to paint a radiator, check this post out.)

What have you guys finished this month? Anything non-post worthy but life changing?

Emily
I'm a home improvement enthusiast, living a very merry DIY lifestyle. You can find me writing for HGTV and DIY Network, follow me on facebook and instagram, or drop me a note if you'd like. I love notes.

I really like the white light fixture and the silver radiator. Sort of sad the gallery wall is gone.

P.S. re: the too-bright light – my husband did the same thing with our outside light. I had to tell him NASA kept calling to complain that their satellites were being thrown off before he would change it. :-)

HA – NASA threats. I’m sad the gallery wall is gone too; if I had enough foresight I would have done the stairs differently to complement the existing frames. Still looking for the “right place” to reinstall it. :-/

Not sure if this is non post worth but life changing…..but I got all the cedar trim on the front of the house and the garage doors done with a fresh coat of stain…looks good with my freshly painted front door. I made 2 attempts with Ace to have them try to match the color of the stain in some paint (for the garage doors). When that wasn’t working out I finally just used the same stain as the trim..put 2 coats seems to look like it will work. Hey have you seen that Martha Stewart has a 3 lines of special paints one being “precious metals”?–look interseting.

That’s a huge undertaking! I bet it looks really great!

And yes, I’ve noticed that precious metals collection by Martha Stewart – and I’ve seen a few nice shades left in the OOPS paint bin too for $2-$5. I haven’t yet concocted a reason to buy any of it yet, but I do like it.