I crunched some numbers and realized that it took me 237 weeks since moving in to get art hung on the walls of our master bedroom. Mild case of “hole-in-the-wall-phobia.”

Now, I know that’s totally crazy. I know how to patch and paint and I’ve done it plenty, but in the interest of hanging the art in the right damn space on the first try, it took this long (yup, 4.5 years) to actually make things happen without rushing the process just to check it off the list.

It’s especially nice to finally live in a bedroom that doesn’t feel like my first apartment where I was forbidden from damaging the drywall. And you how daylight reflects off frame glass? It sure makes a room feel more homey (also, impossibly hard to photograph). 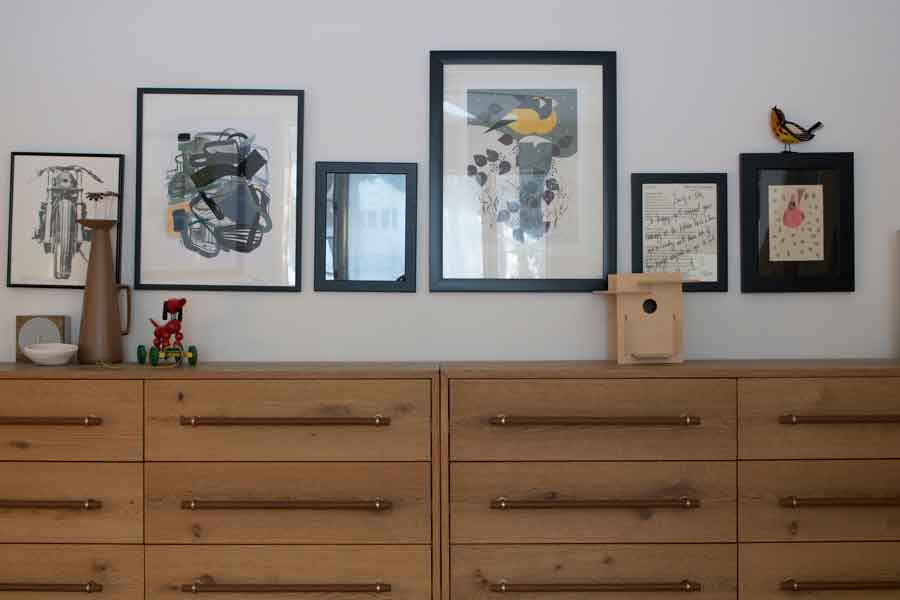 Backtrack for a sec before this becomes all about me being weird for not wanting to put nails into my drywall. Part of the reason this took so long was also due to the fact that we really needed new bedroom dressers. The set of IKEA MALM dressers I bought 10+ years ago has now been fully recalled–now to the point where IKEA is begging to come pick them up to spare you the inconvenience of having to rent a truck in order to transport them back to a store–but when you’re outfitting your “forever home” you want to buy “forever dressers” and it’s really hard to commit to “forever dressers” without making some sort of concession for budget/quality/size/finishing details when you’re simultaneously under the pressure of recalled dressers that may or may not tip on your children because you haven’t anchored them to the wall (back to being obsessed about perfect, hole-free drywall). In short, we’ve been waiting it out until the right dresser at the right price point came into line of sight. Fortunately, that opportunity knocked sometime last fall when a decent set of Benson 6-drawer dressers at West Elm caught my eye. They’re no longer available in the light oak color we bought, but the darker walnut option is available here. Originally priced around $1,200/each, they were marked down to $699 + some bonus discounts + 20% west elm card bonus cash back (+ an exorbitant amount for shipping and setup) and the set of 2 new dressers cost about $1,700 from store-to-door. Pricing-wise, they were a good bargain considering that the units I had really been coveting were about 4x more expensive–completely unjustifiable to my spending senses (but I still love you, DWR). The West Elm dressers were also the perfect size and scale for the wall I had been scheming for in our room, and the lighter veneer wood finish was ideal, too. It’s hard to find light wood pieces that are modern but not just white.

I took a few “before” photos for a good laugh, knowing that it would be crazy to look back on this wall someday and recalling that we lived with it looking like this for 4+ years.

I openly admit that I have a love/hate relationship with West Elm furniture. I had some reluctance about buying dressers there because we’re less than thrilled with our Tillary Sectional, but it doesn’t end there. Our mod upholstered bed frame is literally about to collapse on the floor because a leg is 2-seconds from breaking off (they sent a backup part but angled legs on any furniture get a thumbs-down from me now), and I always thought the drawers in store felt like they had cheap sliders… but all that said, I took a risk and these ones aren’t too bad. They close nicely and slide smoothly, and the leather handles do feel nice and higher end than other products at the same price point. 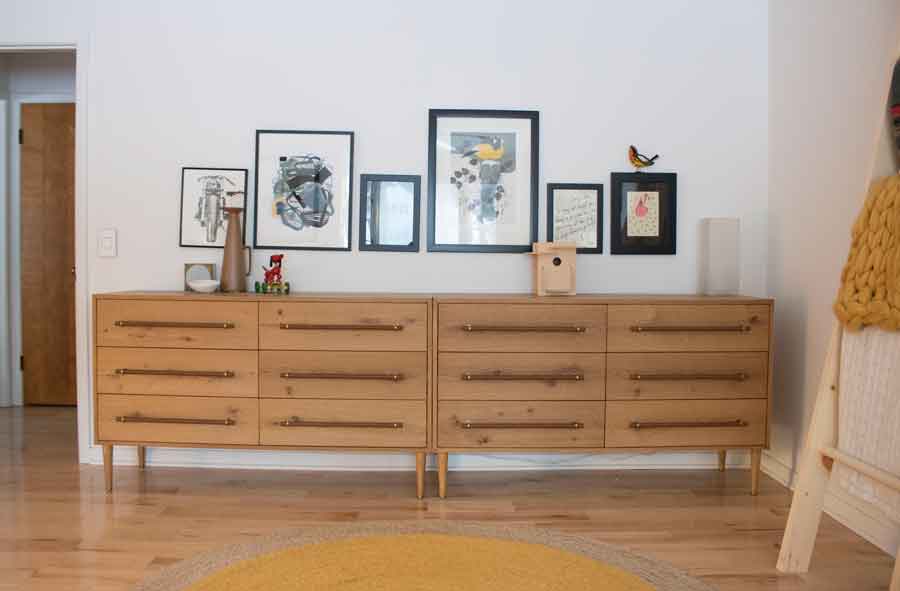 The real perk of getting new dressers was finally being able to finish that end of the bedroom with some artwork. Our collection is a nice mix of prints that we’ve been gifted (or gifted each other), small originals that we’ve purchased, and a whole bunch of random treasures we’ve collected or inherited. It still took me months to decide which pieces would be hung above the dressers on the wall to make the space feel more finished, but I considered:

I sat around and brewed about the options for months, planning that I would have them selected and hung on New Years Day if all my ducks aligned.

Didn’t quite make my deadline–I’ll almost always choose a lazy day with friends over a self-imposed deadline–but I got it done in the goal week and boy, did that ever deserve a high-five.

Hanging artwork to be bottom-aligned is so much like installing any type of gallery wall that it hardly feels like it needs much explanation, but what I did was: 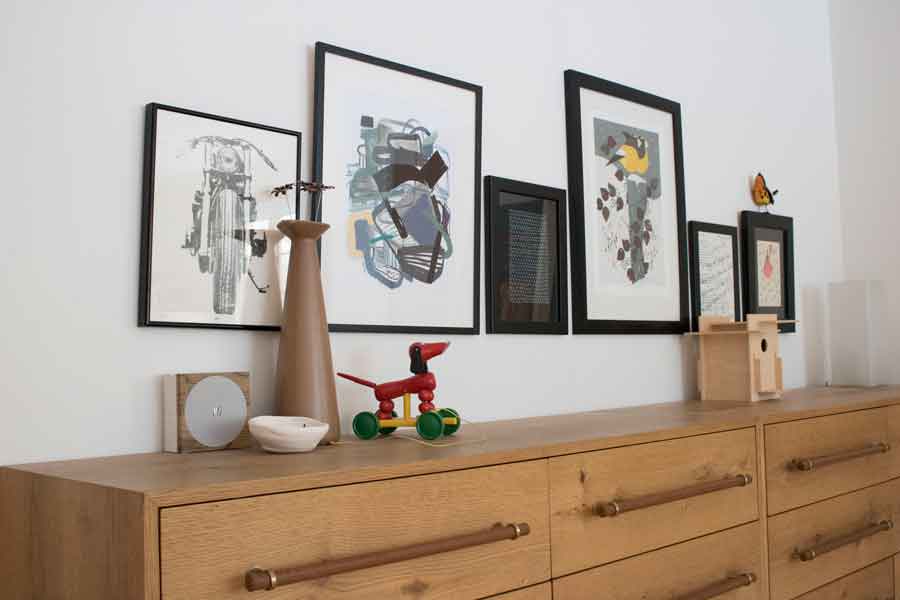 As for our 6 frames? Left to right:

Emily
I'm a home improvement enthusiast, living a very merry DIY lifestyle. You can find me writing for HGTV and DIY Network, follow me on facebook and instagram, or drop me a note if you'd like. I love notes.

Apparently I keep forgetting to check you blog for new posts :(

I love those dressers, they look great in your room! And I completely understand the price point vs quality struggle. I am forever wrestling with cost vs quality vs “do I really NEED this?” Currently having this struggle about flatware, as ours is approaching the 10 year mark and really starting to show it. Also, last hurricane season destroyed my rain boots.

Having said all that, I think I’m beginning to have a love/hate with WE, too. I love the design of most of their stuff, but I’m not a huge fan of some of the quality. I have many feels about our couch, coffee table, dining table and whatever else we have that I’m forgetting about, but they’re all still usable and I can’t really justify replacing any of it.

Is it the mounting bracket on angled legs you’re not a fan of, or are they not very sturdy in general? We’re in the planning stages of a bed frame build, and I keep coming back to the look of angled legs, but maybe they are a bad idea for something that gets as much use as a bed frame. (Honestly in our small room you can’t see the legs/headboard anyway, so maybe I’m over-thinking the bed frame design.)

Oops, I totally left you a novel of a comment and did not even get around to the actual point of your post.

I have similar anxieties over hanging things these days. I guess I’ve come to realize that while I’m 100% capable of patching “oops that’s in the wrong spot” or “ok, time for something new” holes, I’m unlikely to actually do it. There are probably a bunch of holes behind most of my artwork for that reason. I guess I could combat this by just using picture ledges everywhere, but that look doesn’t seem right for every room.

Thankfully, after we finally got around to moving into our master bedroom last fall, Robert got tired of looking at the painting across from our bed leaning against the wall, so he hung it for me. Now I suppose it will just take me an eon to address the fact that the canvas stretchers are more of a rhombus shape than a rectangle, and really need to be straightened?

Hey Cait! I like to keep you on your toes – posts coming in sporadic bursts these days (and more to come!).
I think the structural integrity of the angled legs is my main complaint on the bed; it’s just an undue stress on the hardware, and in our case actually cracked the wood of the footboard. We were able to get a replacement from the company–a new footboard and side boards–but for a year or so now have just been tightening down the hardware periodically. Once the wood cracks all the way (and it certainly will with time) at least we’ll be able to swap it out instead of replacing the whole bed frame.
The dressers are still nice; we’ve had them since October or so. It really is hard to find nice, solid wood construction these days that’s affordable. The age of DIY/repair/refinishing has not passed. I wish I could have found a great vintage set to refinish for our bedroom, but no luck!

Robert recently (is almost 3 months still “recently”? I’m going to go with yes) started working in a custom wood shop building furniture, so I think we have/will become a whole new level of annoyingly-critical about furniture construction. Not sure if I should be ashamed of that or not. Seems like it’s going to make it challenging any time I try to replace something in the future. Even though I completely understand the level of craftsmanship that goes into truly good quality piece, most of it is still way out of my price range.

Thanks for the response about the bed fame! That definitely makes sense. I guess angled legs have more of a place on something like a console table, or anything that gets lighter use than a bed, couch or chair? Maybe I need to crawl under my dining table and see how those are attached. That obviously doesn’t receive the same stress as furniture you sit/sleep on, but it has to withstand extending to have the leaf added.

We definitely lucked into our MCM bedroom dresser/nightstands, because my parents’ neighbor was literally throwing one of the nightstands away. My mom rushed over and stopped him, telling him what good quality it was, and now we have both nightstands and the 9 drawer dresser.

I have another MCM dresser in the living room that was a pair but we only bought one to start with and when we went back shortly after its mate was gone. Apparently I have a thing for dressers. And chairs.

Robert can build you anything now! That sounds like a fun job. Hope he’s enjoying it!
We don’t have problems with other angled legs, though I will say on our dining table that’s from the 1960s (and slightly angled) there are 3x the bolts holding each leg in position. On our coffee table, there’s a shelf a few inches off the floor that bolts between each of the 4 legs and that holds them in position better than if there were no shelf and the legs were only attached to the tabletop.

He’s definitely enjoying it! And learning a lot. It’s actually part of a local architectural salvage company, a place I think we talked about visiting but it was too far/we were short on time when you were here.

I think our dining table has some cross bracing and triangulation that probably helps the legs. Definitely just had to remind myself what your table looks like, although I remembered talking about that library score! And that’s a good point about the shelf on your coffee table.