This weekend (5/15) marks the two year anniversary of me. Of “grown up” me. Of me living in my home. My very own home. Any of you who knew me when I made the decision to buy a home may recall that it was very much something I decided upon on a whim.

The short version of the story:

You’ve probably perused the before/after section of the site before. But seriously, when I pull together the photos side by side like I’m about to show you, I’m blown away at how much I’ve done to this place in 2 years.

Please enjoy, and celebrate homeownership pride with me; afterall, forbes.com is – it announced this week that Rochester, NY is the best city in which to buy a home. Frickin’ HIGH FIVE, people.

On to the photos:

Exterior of the house: It was stripped. (Thank you, tax credit.) 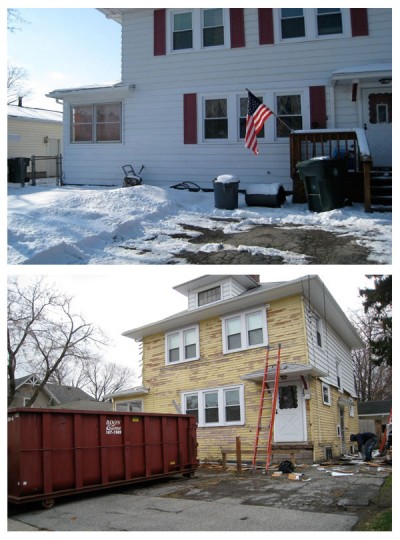 Of course, it looked a hell of a lot better once it was finished (it’s just fun to show that the house was temporarily yellow). 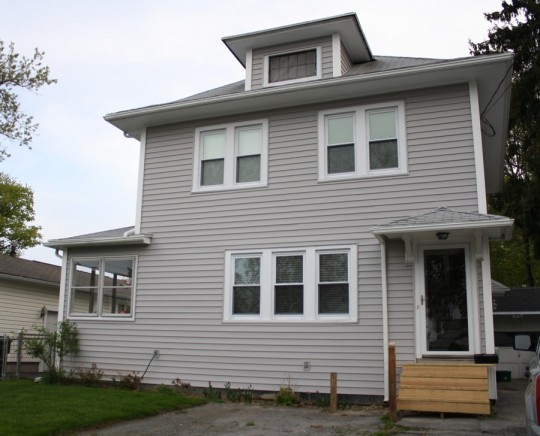 The front entryway is a work in progress – that front porch should be finished within the next few weeks (it’s been begging for railings): 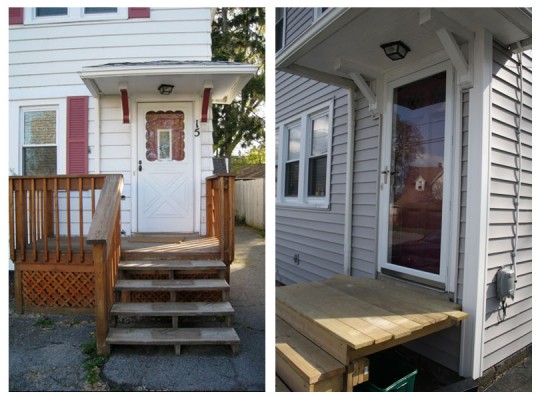 The deck and pergolas on the back of the house are entirely new. DIY’ed too, just search “deck” on this site (or click right here) and see a whole slew of posts about this project. Impressive change, right? 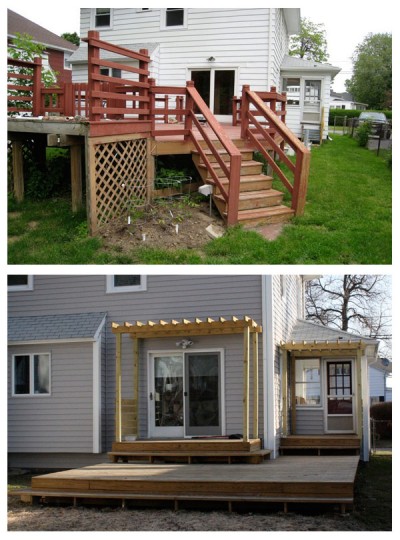 The Living Room: A dramatic makeover from carpeted drab space to bright and slick (I can’t describe it any other way) happiness.

The Sunroom: It was storage for children’s toys before I moved in. And it was carpeted. What can I say, anything was an improvement. Yes, there’s a margarita in my photo; call it a grown-up toy. 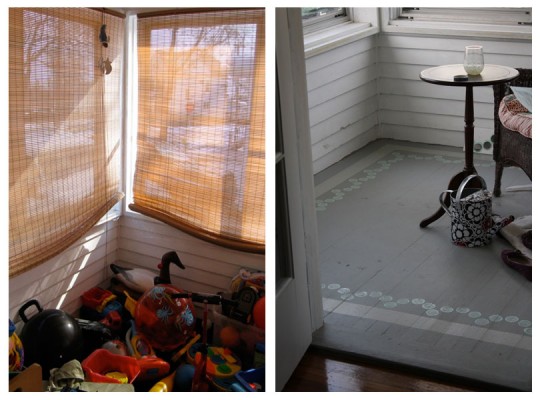 The Dining Room: It’s more so a workspace for me than a functional dining room, but it too received a nice makeover from floor to ceiling. 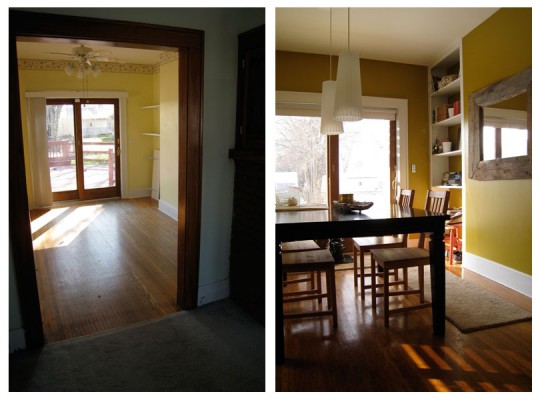 And I am in love with my DIY’ed built-in-shelves as much as a girl could be in love with something like that. Not in a creepy Taboo kind of way. You can see how I built them here and here. 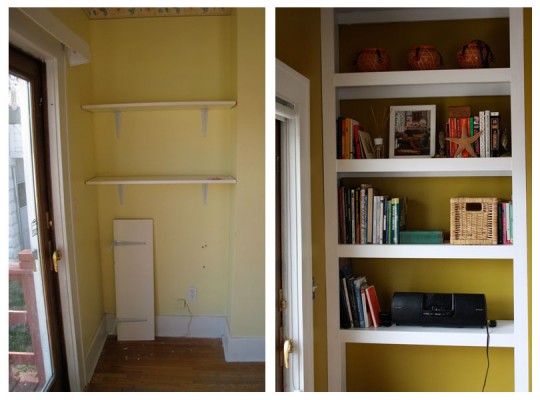 The Kitchen: The initial change involved painting it white. It’s hard to tell in the original photo, but each wall was painted a different shade of blue. And then I removed 7 upper cabinets to make way for open shelving. 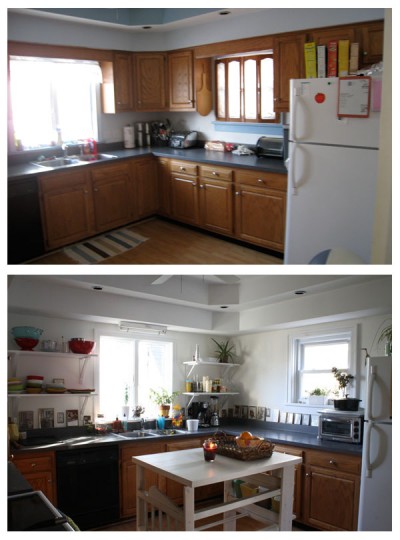 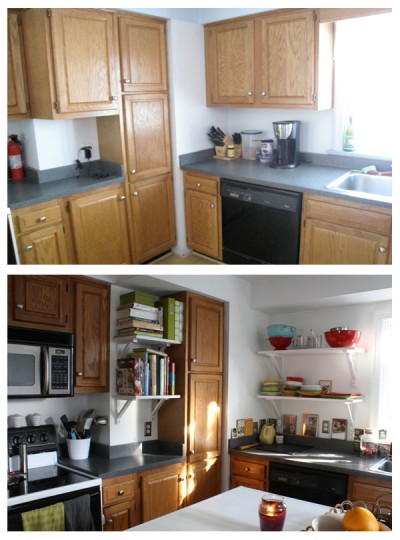 The stairwell recieved an updo too. Not just paint, I swapped in a new closet door and made a collage of frames on the wall more recently. 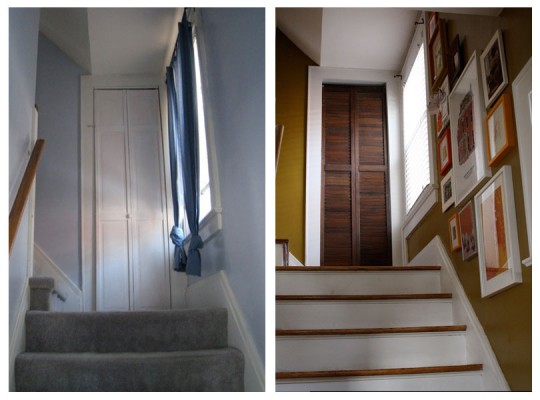 The view down the stairs is improved too; those horizontal faux-wood blinds are throughout the whole house and really change each room dramatically in a way that plastic blinds don’t. Plus, the hardwood landing looks sexy. People don’t usually call hardwood floors sexy, do they? Just me? 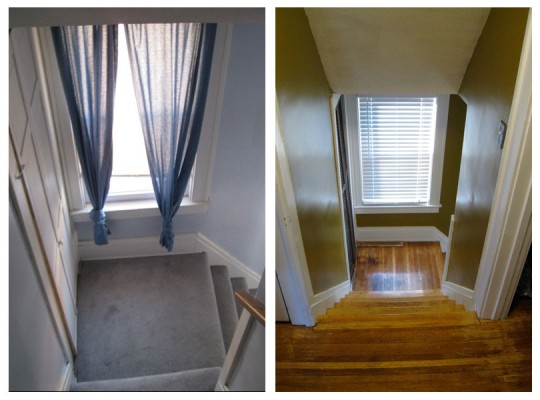 Master Bedroom: It’s bright in there; even dark gray works well without making the space feel small(er than it is). The refinished floors and blinds are wonderful in here. 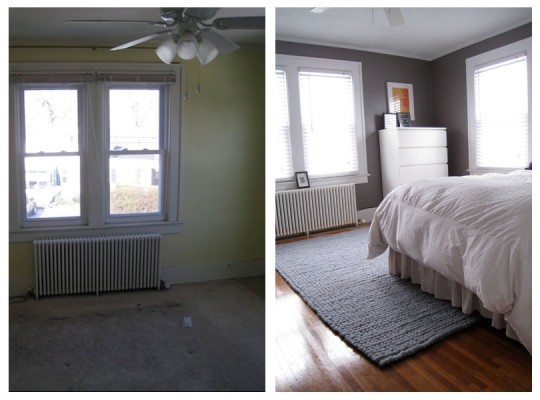 The Nursery-turned-Walk-In-Closet: Animals were painted over, and the room was neutralized and made highly functional with the help of some big IKEA shelves. I was lacking closet space in every single apartment I lived in, so you could say I’m making up for it in a big way. 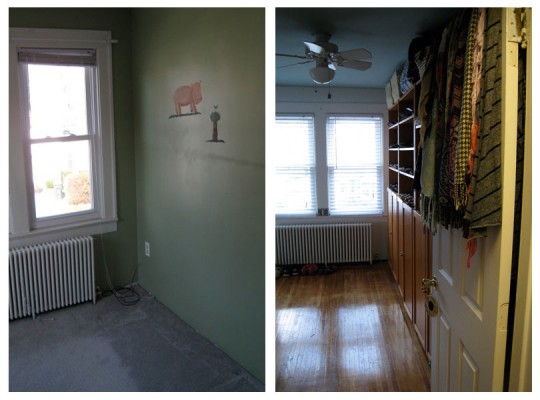 The Basement: We built workbenches over the winter, but the biggest change was the installation of glass block windows. Let there be light! 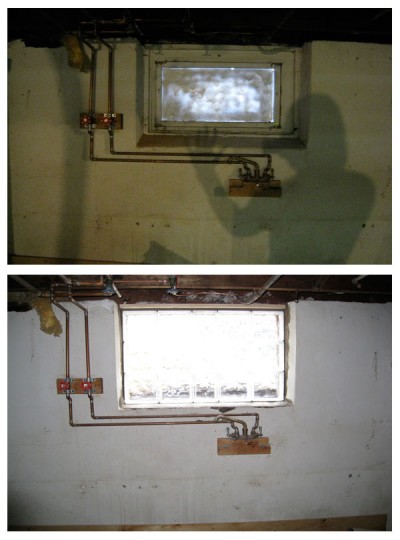 Thank you again for all of your support, encouragement, and kind words about the projects you’ve seen so far; lots more to come.

What an amazing transformation! You’ve done a lot of work to make the house yours and it looks fantastic. You should be proud.

Thank you, Irene; I appreciate your support! :) I am quite excited and proud when I see the photos side by side.

You’ve accomplished an amazing transformation. Seeing it all in once place like this really shows off all the work you’ve done. Wow!

amazing changes Emily! Way to go! We’ll hit our 2 year mark in November, right at Thanksgiving and we’re stoked… so I really know how you feel and am SUPER stoked for you! Look at all you’ve done!

Thanks Ashley! I hope you post a similar B+A story to recap your progress! Happy 1.5 years to you!

The amount of light I highly attribute back to those awesome white blinds. Something about the effect of the heavy white 2″ blinds makes light reflect the same way it reflects off snow. And consequently, the house is just streaming with light whenever I have them opened. The bedroom is especially great, because I can make it REALLY DARK too just by closing them up and being in a dark gray space. Thanks for your nice comment!

This post makes me love your house even more, which I didn’t know was possible!

Too sweet, Cait! Thanks for stopping in and “celebrating”.

WOW! You are amazing! What an incredible amount of work you have put in! I love every transformation! But I think my fav is the stairs! We did that to ours too! It makes such a difference! So classy!

Thanks Erin! I love the stairs too; sometimes I wish for a runner, but when they’re all nice and shiny like in the picture, they’re just too pretty to cover.

I can’t believe how much you’ve accomplished in such a short time! You inspired me to look back at some of our “before” photos and it’s given me a new sense of motivation to get to work on some of the projects we have planned for the spring & summer. Congrats on being all grown up :)

Just a few things that made me laugh – I totally call furniture, floors, wall colors, and other things related to DIY “afters” sexy – those hardwood floors are FAB. Also, we had the same exact linoleum floor as you in our master bath (not too bad, but now gone in favor of the marble tiles I showed you) and painted walls a similar shade of gray (I love it).

This is the nicest note ever, Katrina! Thanks for checking the post out. I’m DYING to tear out those linoleum tiles; I’ll have to stop by Mr. Seconds and see if I can find myself anything as nice as your marble… what a lucky find for you.