Come on over now, Grandma. Between the handrail that I reinstalled on the inside staircase and the brand-spankin’ new front porch with fancy dual-handrails that is about to be revealed, you’re probably less likely to take a fall on my watch.

It hasn’t been too safe around here for the last 7 months. And I’m kind of a safety nazi. I had gotten someone on Craigslist to successfully disassemble and haul away the old front porch last November; that old porch wasn’t pretty. Facts: It was stained reddish. It was an odd, unflattering shape. Its platform extended beyond the overhang every which way. And it was really ragged out. Remember it? Here’s a refresher. 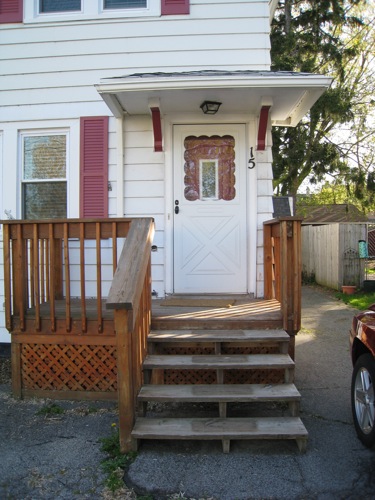 The timing of it’s demise corresponded with the new siding project; I had wanted the contracted crew to install a new header board for the porch and side around that board while they were doing the rest of the house. Neither Pete or I wanted to be responsible for hacking into the perfect siding once it had been installed, so this seemed like a pretty good plan. And yes, it ended up working out in our favor just fine.

Except that it was then November. And I live in Rochester. Which means it gets cold, and not many people want to be using power tools outside in icy conditions, myself included. For a few weeks around Christmas I was certain that my house wasn’t going to have any kind of front porch until springtime, but we did luck out right around New Years, finding ourselves home on a weekend when it happened to be a balmy 60 degrees. I went out and bought lots of lumber for the front porch, and we had a platform and adequate steps built just in time to ring in the first substantial snowstorm of the new year. (You can read that whole process right here and here, if you’re interested). The porch has looked just like this for 5 full months now. 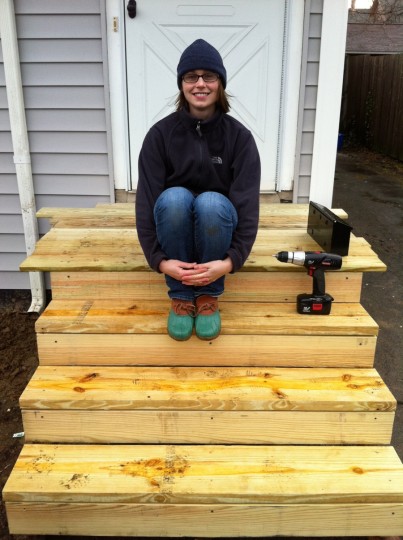 And that brings me to current day.

Good ol’ Memorial Day weekend is usually a nice time for some yard work (and I’m forever excited about the hardware store deals this time of year, which is part of the reason I started working on the front garden) but we also had ambitious plans of getting the much-needed railings installed on the front porch. After all, like I was hinting at, the entryway has been lacking safety for months now. Both Pete and I had nearly fallen off in moments of imbalance, and I just couldn’t have Grandma or Grandpa being concerned with falling off the porch on their way in. Plus, it looked bad. And I didn’t want to find myself with some fine for an unsafe structure, you know?

I had already bought 4″x4″ boards for the railing posts, and those spent the winter safely nestled in the garage, but I then spent a lot of time trying to figure out how exactly I wanted to do the actual barrier railing pieces. Similar to the pergola railings, I leaned towards a chunky horizontal presentation for the front porch too; and since you can see one of the pergolas from the road, mimicking those railings seemed like it would look consistent and refreshing all around. I leaned to use the same 1″x6″ boards that come in convenient 8′ lengths right at Home Depot.

You might recall from some of the more recent pictures of the front of my house that I left the front porch floor boards un-trimmed to length; this is because they’re pressure treated, and based on my experience with the back deck, I knew that the boards would shrink a little bit in width and length, which they did after having the 5 months to settle into place, so we snapped a chalk line and trimmed the boards to be even; we’re confident that they’ll remain looking this clean-cut for years to come. 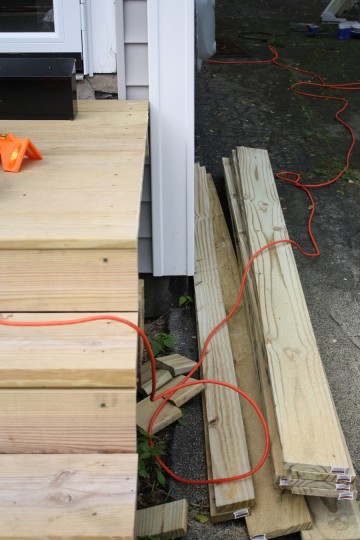 The posts were the easy part. Wait, did I say that? This ended up being a highly complex project starting with the posts. It made both of us thankful for being reasonably good at the whole trigonometry thing. Angles and measuring and planning was made much easier by our new friend, Mr. Miter Saw, which I rocked out on for hours. 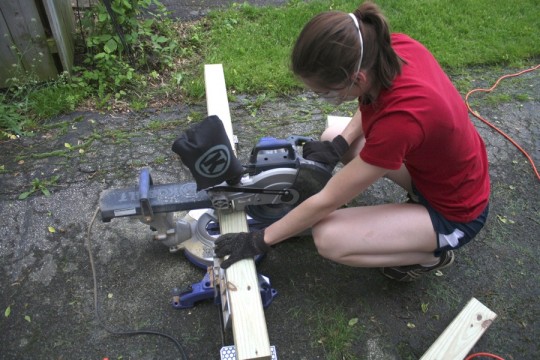 We didn’t actually expect it to be a 7-hour job, but it became that pretty quickly. First thing we realized was that the posts leading down the stairs would need to be angled to accommodate the slanted railing, and that slant needed to be the exact same angle as the stairs, which we deciphered to be about 36-degrees but don’t ask us how we came up with that. Three random techniques from deep within our mathematically-minded brains validated that measure, so we went with it and held our breath. Turns out it worked. 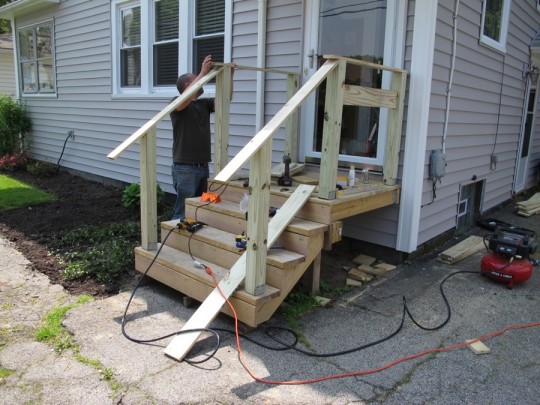 If I haven’t said it before, I’ll say it again; Pete a level-headed dude and every single board that went up was checked thrice for being level in all directions. This obviously works very well in my favor. I “eyeball” almost everything.

Tricky part numero dos had something to do with realizing that the boards slanting down the stairs needed to be cut at an angle, therefore making the board appear to be 7″ wide instead of 6″. And while it’s still hard for me to grasp exactly what kind of mind games these pressure treated boards were playin’ on me, we had to adjust our game plan a little bit and go with the whole fool-your-eye strategy and cut the slanted boards down to 4-7/8″ wide instead of 6″. Tell me if you can seriously tell that we did some mindful manipulation to the slanted boards when you see the final pictures, OK? 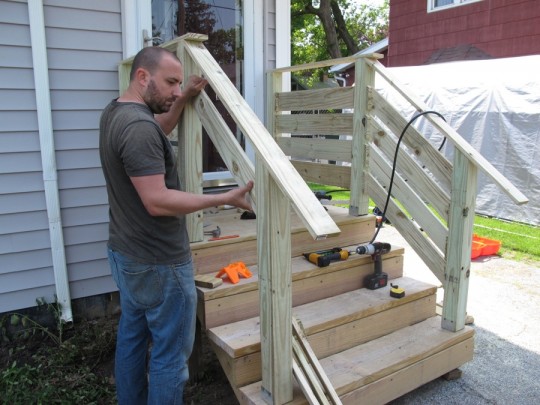 You can see in these pictures that we modified our install process a little bit from how we installed the railings on the pergolas; this time, each board is affixed to the space in between each post instead of overlapping it and being attached to the exterior of the post. We think this makes for a cleaner overall look. It wasn’t difficult to do either, thanks to Pete’s idea of sistering up some smaller pieces of wood to the posts (perfectly measured to match the railings boards) and letting the rails attach to those. From the outside it looks seamless, and from the inside of the railing it looks like this (not bad at all): 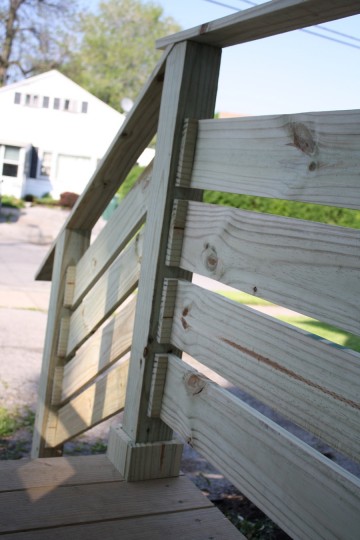 Pete earned bonus points by deciding to cap off the post caps too. He’s been telling me it would be easy to do this around the pergola posts too, and now I believe him. Instead of leaving them exposed like this: 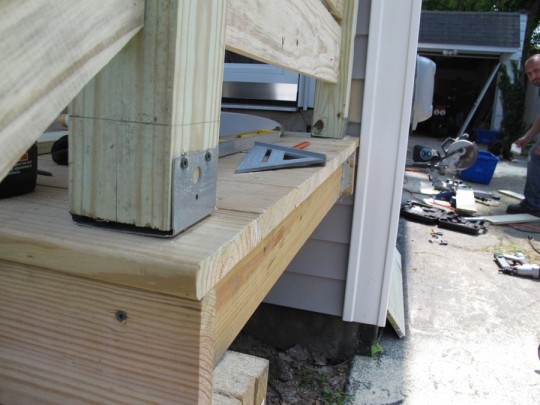 He encased each of the 6 caps with custom cut boxes to conceal the metal uglies. I like the nice chunkiness of the whole thing too.

From afar, the house is really starting to come together; I know that I’ve said that before but between the updates with the landscaping this weekend, the new doors, the new siding, and the new front porch, it’s really looking much different from when I moved in. New, new, new. 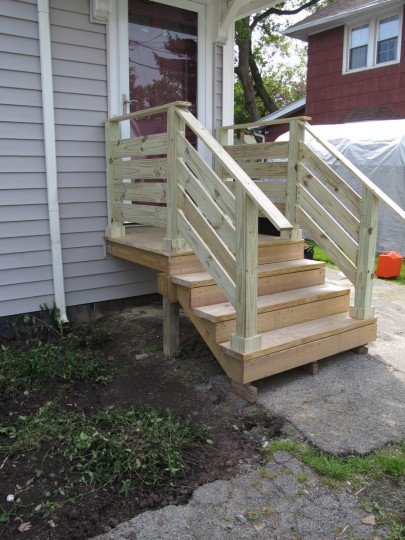 Next up: weather proofing. It’s due for a nice water sealant in the next few weeks to help the wood keep looking so good. I’m considering staining also, but I might leave that for another year and just enjoy the fresh new wood look for awhile longer.

P.S. My neighbor’s big metallic temporary garage has been there for two years, sad face. I wish very much for it to be gone. Just wanted to you to know I have no say in that. 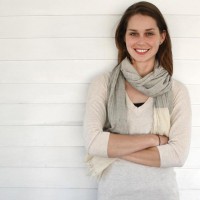 I laughed at the thought of trying to shovel the snow out fast enough so you could work on this project in the winter :) Glad you whipped those sneaky, mind-game-playin boards into shape! Looks great

And I tend to eyeball everything, too. Robert usually measures everything multiple times, makes sure it’s level, etc. Strangely though, the one side of our outdoor shower being unlevel wasn’t my doing (and then he fixed it, so who cares?)

Thanks Katrina and Cait! I’m so happy with the end-result.

LOL… I was thinking the same thing! Eric measure… I eyeball!

LOVE the new rails. The detail is so clean, simple, and modern! :)

Great work! I chuckled at the 36* angle – it doesn’t matter how you got there as long as it works, right?

Haha, yes. Whatever we did worked OK. PHEW.

I’m sorry, but I think it looks cheap and unfinished. It’s also amazingly small for the size of the house. I think you should have gone bigger not smaller. The door looks nice though.

Thanks Karin. Some days I agree. I’d love to build a full porch with overhang along the front of my house. Can I borrow $20,000?

I just had a small porch (contractor built) inspected by the city, hand rails need to be grippable, need to be stable,need riser, step heights didn’t match. Yours looks to meet code except for handrail grip.

Hi. Love the railing! Did you use finishing nails for the railing boards and “sister” pieces? I don’t see any screws.

Yes, I think we did! Or used pocket screws. I can’t remember.