It wasn’t too long ago that I snapped this photo of some lady’s foot and a great wooden (albeit very weathered) doormat at one of my random garage sale stops. No, it wasn’t for sale, but I liked the look and feel of it beneath my feet moreso than the more traditional doormats. I’m just realizing now that there are a lot of doormats in this photo, how odd.

I haven’t actually gone out and bought a doormat since I’ve lived in my house, although I’m forever coveting the rubber styles available at Target from the Smith & Hawken line of products; you must know what I’m talkin’ about – they’re the ones made to look like a wrought-iron gate but for your feet? Yeah, they make me go ga-ga. But I haven’t bought because they’re not my little house’s glass slipper, or glass slipper walkway, or something, I’m getting off track…

What I wanted to do instead (of spending gobs of money) is make my own wooden doormat. Psst: do a search for doormats on Pinterest and be wow-ed by some pretty rainbow varieties. I guarantee you’ll like.

The concept I wanted to mimic was much like the garage sale find, but with a hint more of spa-like teak slatted style. Remember how over the winter Pete made me this custom shoe rack for my front entryway? It’s still there, and we use it a lot. I wanted my doormat to match this as best I could finagle.

I really lucked out a little bit on the assembly process; when we had built the front porch, I mentioned quietly that we actually had to do a little custom work on the rails that extend diagonally down the steps, namely, we had to take 1″ off each board lengthwise that fortunately you wouldn’t notice if you have an untrained eye. I didn’t throw them out at the time, just setting them aside to be protected and out of the way in the garage. Having had a few weeks to shrink (since they’re pressure treated) they were in perfect condition to be used as the starting pieces for my DIY doormat.

I tested the layout and length of the boards (which happened to be around 36″) on the front landing; by my approximations at this point, the mat would end up being about 1.75′ x 3′, a pretty average doormat size.

Because I wanted to mimic the shoe rack that was already in the entryway, I decided custom cut 1″x1″x1.5″ blocks out of two additional pieces of wood that were ripped. Each of the existing 36″ in boards were trimmed back to 35″ (there was a little variance between them, and so it was just a matter of trimming them to be the same length).

When I got to the point where I could lay out my project, I found that I had pleeenty of extra 1″x1″x1.5″ blocks, which at some point will find their way into another project. In any case, it was looking pretty good. Oh, and it was just after this point that the colorful stamps that had been on the wood were sanded off.

Before I did anything else, I stained the wood with some Oops Stain that I scored at Home Depot and have already used on a plethora of projects, like staining the sunroom wicker, and this newly supported bookshelf. Really, this post should have been titled “Just another way to make use of a really inexpensive can of brown stain”. And for the record, I don’t really think I’m a diva, I’m just in a mood.

For assembly, I was inspired to use some twine that I had bought but never used. I tried first to use an 11/64 drill bit, but in the end it wasn’t quite wide enough to get the unraveling twine through without making shredded on the holes. 13/64 was much better (and while it really doesn’t sound like much of a difference in size of drill bit… it was). And a friendly shout-out to Grandpa, who loads me up with traditional ol’ wooden yard sticks anytime I’m over at his place. I actually use them a lot – for projects <36″ it’s easier than a flimsy tape measure.

I learned quickly that taping the ends of the twine helped immensely. Do this if you’re ever going to thread twine through anything smaller than an a roll of masking tape.

The original concept up in my head asked for the twine to be knotted inbetween each and every board; a good idea, but in practice I wasn’t digging how it was going to look. Luckily I realized this before I had more than two boards assembled.

So out the knots came, and I assembled the pieces flush together, only knotting on the two most outside edges of the doormat. Success! It did make it a smidgen narrower than estimated, but well worth it, and still plenty wide for even a large foot.

The lines look a bit cleaner without the additional knots, and more than anything else, it’s quite sturdy and not as flimsy as it would have been otherwise.

Of course Cody stands at the door wondering why anytime I exit the house he’s not coming with me, so he’s in the picture, which actually helps since it blocks my reflection quite a bit. 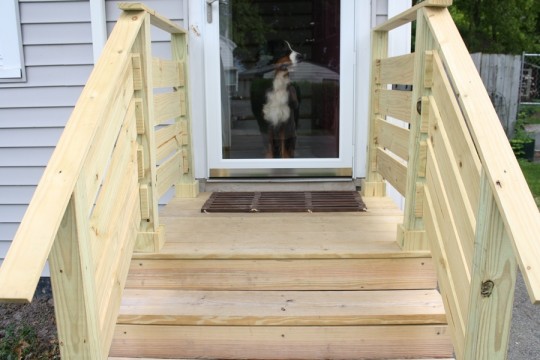 The final dimensions of the doormat were 17″x35″, and while it’s not weatherproofed yet, it’ll probably get a coating in the fall when I do the whole front porch; I’m interested to see if the brown wears down a little bit for a more authentic look in the meantime.

love love love! I’ve been dreaming of making one of these for my home. Thank you once again for paving the way my dear DIY-er! I shall try my hand soon!

Thanks Amber! You’re always too kind. It was a really, really easy project when it came down to it; if I hadn’t taken the time to stain the boards, it could probably have been done in <2 hours.

That looks great! Maybe I’ll make something like that for a “mat” in our outdoor shower. Hmmm…

Yeah – out of teak or cedar, it’d be a great addition to an outdoor shower space!

totally a GREAT idea for the outdoor shower!