Do It: DIY Greek Yogurt

I don’t often write about cooking, what I cook, how I cook, or what I eat, but DIY Greek Yogurt is something I’ve been wanting to try for awhile. Yogurt is a favorite snack of mine. I eat it daily, and therefore buy a lot of it. Usually, just the Light ‘n’ Fit variety that I can pick up for about 50-cents/each, but really do love the richness of heavy, greek yogurt coupled with fruit the way that Chobani or Stonyfield works it, just not the cost. Greek yogurt is expensive when you want it as much as I do. Going greek would be $12/week compared to the $3.50/week I spend on Light ‘n’ Fit.

But, come to find, DIY greek yogurt is easy.

I followed a tutorial outlined at Happy Simple Living closely, and ended up with a great result that I think you’d enjoy too.

You’ll need:
– 8-cups of any milk you want, which is exactly a 1/2-gallon container (I used 1%, the original tutorial called for organic fat-free)
– 2.5 tablespoons of plain yogurt with live cultures (I used part of a container that I picked up for 40-cents)
– Candy/Meat Thermometer
– Large pot for boiling milk
– Large casserole dish with lid
– Oven with light
– Cheesecloth (I bought 3-yards in a package at JoAnn Fabrics for <$2 with a 40% off coupon)
– Colander
– 12 hours of time, beginning to end. For 10 hours, you’ll just be waiting around for the yogurt to do its thing.

Milk, check. Yogurt, check. No, this post is not sponsored by Wegmans.

Heat 8-cups of milk on the stove, stirring constantly to avoid burning it, until the thermometer reaches 180-degrees. This took me about 20-25 minutes on medium heat. Better put something good on the radio and stretch your mixing wrist first. (I was tuned into an airing of Wake Up With Taylor on Cosmo Radio, SiriusXM, which if you subscribe, you should also consider, hint-hint-nudge-nudge.) 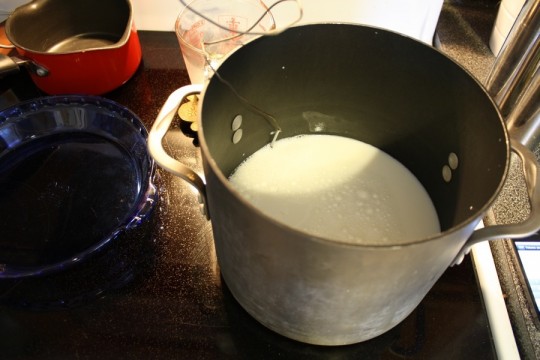 At 180-degrees, remove from the heat, pour all of the milk into the large casserole dish, and leave uncovered until the temperature lowers to 105-110-degrees. At this time you should also turn on the oven light.

Measure out 2.5 tablespoons of the plain yogurt (no more, or else it will effect the thickness and flavor of your end product). 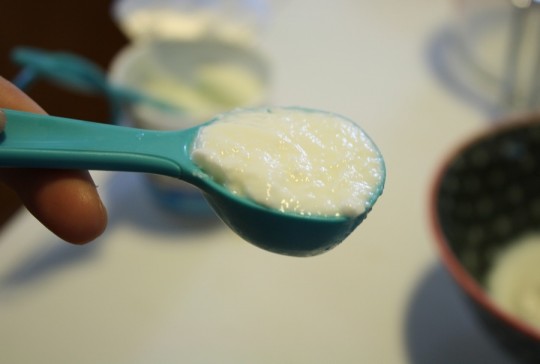 Mix the yogurt in well with the milk, cover the casserole dish, and wrap it completely in one (or a few) kitchen dishcloths. I put my wrapped dish into a pie plate to keep the bottom of the towels tucked in. Leave the covered, wrapped dish in the oven with the light on for 7-8 hours. 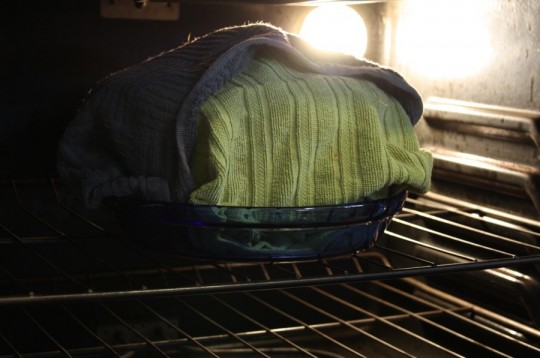 When time has passed, remove and check out your new food (if when you remove it, it seems too watery, put it back in for another hour). Even after 9 hours, mine was surprisingly watery, but don’t be alarmed. It tasted awesome. 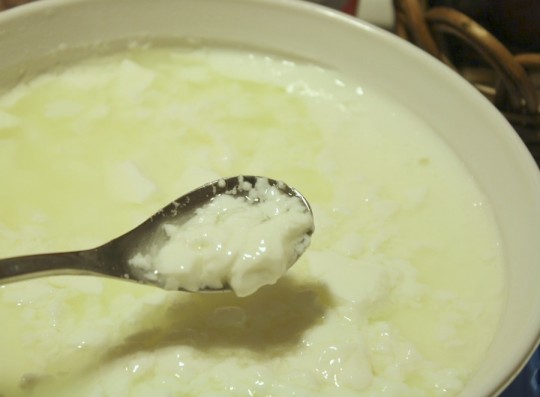 That, right there, is real, actual yogurt. Maybe more watery than the store-bought variety, but tasted the same.

To thicken this plain yogurt a little or a lot (to the greek level), chill the still-warm yogurt for a few hours in the fridge. Once it’s cool, line your common strainer with cheesecloth (the tutorial I followed suggested 4 damp layers). I picked up a pack of cheesecloth at JoAnn Fabric’s that was food grade, but you can find this stuff at the grocery store too. 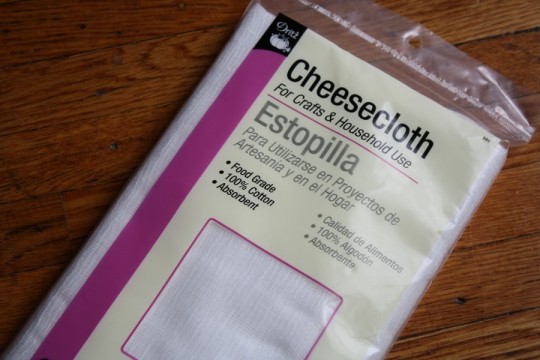 Left to strain through the cheesecloth and into a bowl in the refrigerator for one more hour, checking in routinely to see how much whey is in the bowl. You’ll probably want to clear it out of the bowl a few times to leave room for more seepage. When all’s done, you’ll be left with real yogurt in the colander that’s amazingly thick. Side note: I disposed of my whey, but I hear there are plenty of things you can make to put it to use instead of tossing it. Look into it. 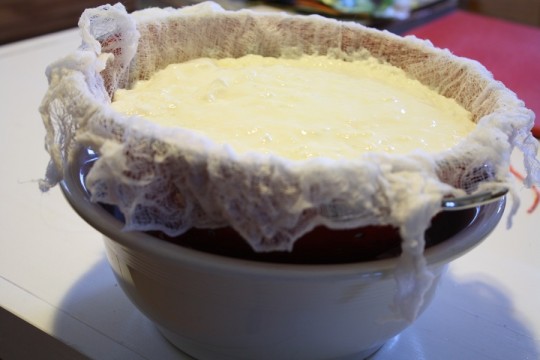 Put whatever you want on your yogurt before you eat it; I opted for some cherries out of the can (too bad they’re not in season any longer), and threw in some granola and almonds because I already had them in the kitchen.

Oh, and after I made my breakfast, I still had 20-ounces left over, which should last a week in the fridge. 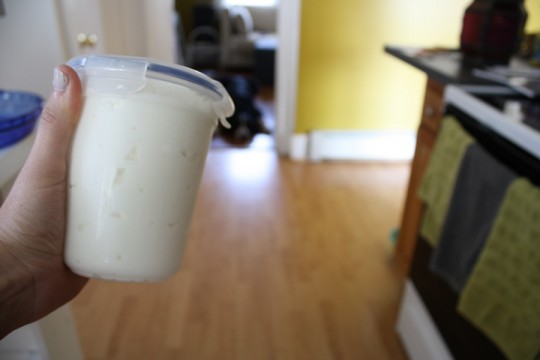 My total costs for 20-ounces of greek yogurt?

$1.95 for a week’s worth of greek yogurt. Plus whatever fruit you want. Enjoy!

I make my yogurt also but add organic non-fat dried milk (milk solids)…about 1/2 C to 3/4 C to my 4C of milk and that thickens it nicely. I don’t have to go through the messy straining cheesecloth step. It taste wonderful and is much cheaper than purchased greek yogurt!

Great tip! Thanks for sharing – I’ll have to try that!

What thermometer did you use and would you recommend it?

It was just a standard digital meat thermometer – worked like a charm!