Our Great Treehouse (The Lowdown On The Spraydown)

We got a bit ahead of ourselves on the whole treehouse thing and stained the t1-11 just a few days after it had been hung. This was before railings, stairs, roof structure went into place, so even though I knew we’d have to go back and stain more at a later time, I did it more to satisfy my own curiosity in how the structure would appear from the road. Bare naked, the raw wood against dark trees stood out a bit. But stained entirely an opaque brown? Totally camo’ed, just a little w-i-n for our sense of privacy.

This was the first time I used a gift that Black & Decker gave me a few years back – a SmartSelect HVLP Sprayer that they said was intended for applying thin stains and paints. I guess that makes it a sponsored post? Not sure, writing about it wasn’t a requirement, but I disclose things like this because I may not have bought this exact brand if I had done loads of product research or had to pay for a paint sprayer out of pocket (the product I used in this post for painting pegboard was a dinky little goober from Harbor Freight). And truth be told, I don’t know if this is model falls into good/better/best when compared to competitors, I only know how it worked for us. But anyways, free sprayer. Put to use. Thanks Black & Decker. 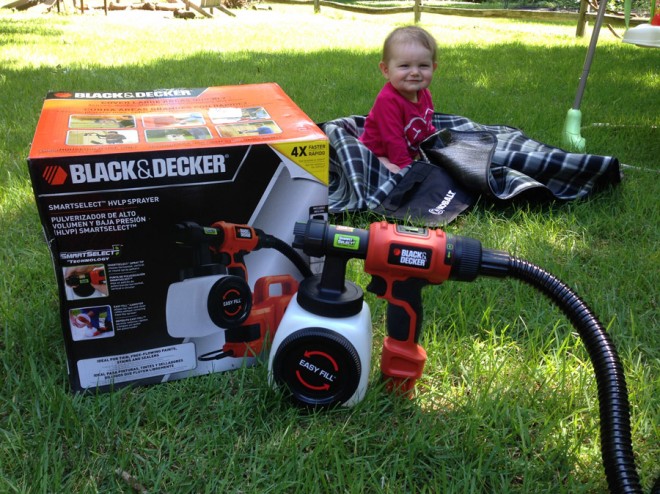 We had originally purchased a water-based Olympic Maximum brand stain in Oxford Brown for another project that fell by the wayside (refinishing these adirondack chairs, which we did want to be opaque to cover an existing color), but the dark brown was a similar color that we would have gravitated towards for the treehouse, so it worked out that we had it on hand when I was feeling the spontaneous need to test out color. It took a little bit of trial and error to determine how much we needed to dilute the  stain, because the Oxford Brown opaqueness wasn’t fluid enough to flow productively through the gun. We probably got about 2 gallons of staining out of the one gallon can after having diluted the product by about 50% with water during each refill (the directions definitely say DO NOT DILUTE, but sometimes ignore that).

We thought a bit about whether it would just be faster to roll on, but given the spacing in the paneling, we figured that we would have had to go back over it with a brush anyways to paint in the gaps; spraying was pretty easy (good arm workout), and definitely went quickly. (I started by spraying the entire board surface at first, but then decided it was more efficient to focus on the vertical board spacing, and follow back over to coat the surface of the board. 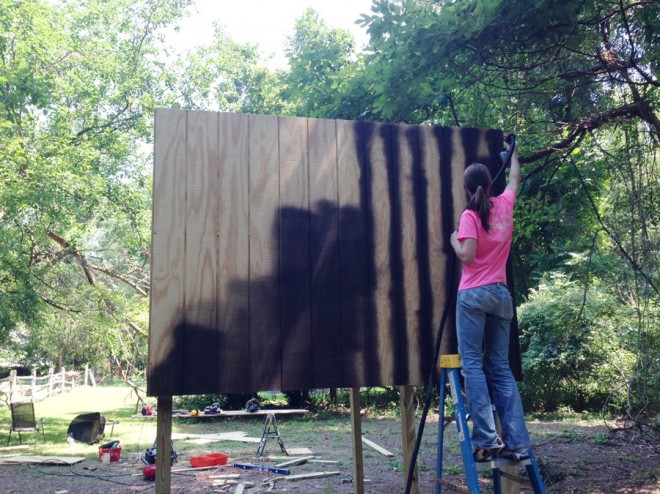 Spraying definitely isn’t the most cost-efficient way of doing a project like this because it does mist in a way that some is inevitably wasted, but it still only took me about 3/4 of a gallon to finish the entire exterior (had I not been diluting, this may have used a gallon and a half?). 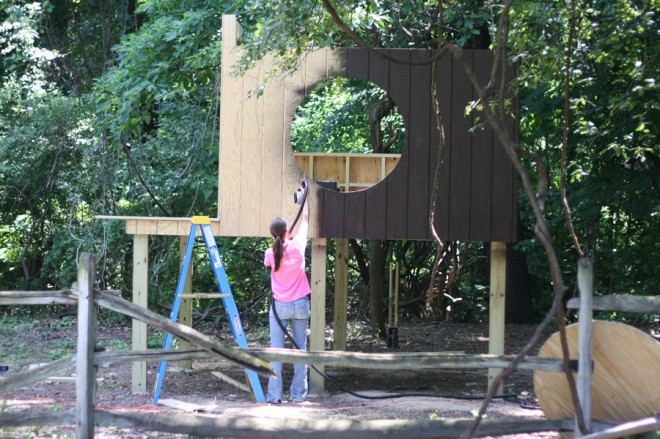 Pete stained the floor inside the treehouse when it was his turn to play, working from the back corner out to the porch area. We did go back with a brush to get the stain evenly inbetween each board, but it was still reasonably efficient to use the sprayer to cover each floorboard since the tool was already out and dirty.

Speaking of dirty, there’s probably some time limit on using a paint sprayer in between flushes; even though the stain we were using was diluted, there was build up at the nozzle that needed to be cleaned every 20 minutes or so, and I consider that wasted product. Even though we still had a lot of work to do to finish the treehouse at this point, it was great to see the outside structure in its finished color.

I just picked up an awesome little paint sprayer (my very first) that I found as a recommendation on a blog that I follow (addicted2decorating). It’s called Critter. It’s super cool because it uses a mason jar as the attachment and paint reservoir. It makes it really easy to change out colors by just swapping out the jars. Also, the jar and the rod that extends into it are the only components that need to be cleaned. You can do so by filling another jar w/ mineral spirits and “spraying” that through for a few seconds. It’s really small and lightweight, so no arm ache. I used it this past weekend on a bench for the first time and it was sooooo easy! I definitely still enjoy painting by hand, but spindles are my nemesis. It doesn’t hurt that I got it on Amazon for only $40! Just an FYI :)